The case of mysterious disappearing vision….?! 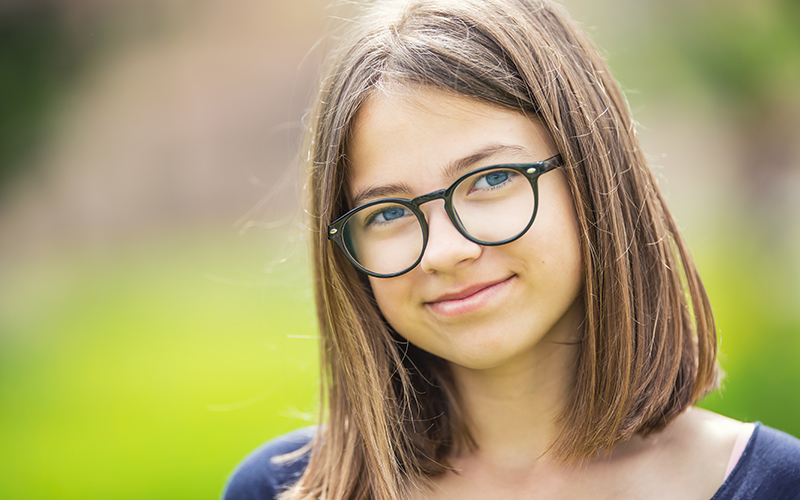 GRAND ROUNDS – Learn with me!

The case of Mysterious disappearing vision….?!

A young girl aged 9y came in for an urgent consult. She had previously been seen by me numerous times (since age 6) usually just routinely. At the last visit she had mild hyperopia (R&L +0.75) and aided VA of 6/6 R&L at both distance and near. The little girl is quite overweight and her parents are extremely “hands-on” bordering on being “helicopter” parents. You know the type – always hovering over the child making a fuss and micro-managing every aspect of her life. She sees numerous ancillary medical practitioners from paediatricians, psychiatrist, OT, speech-hearing, optometrists, physio, etc. etc. You get the picture…? Her latest medical add-on is a paediatric neurologist and she has now been placed on medication for ADD (Concerta) as well as an anti-depressant.

She does well at school and the medication does not appear to be causing any severe side-effects. On the day in question she presented complaining of decreased vision of sudden onset which started the previous week.

The child was complaining that her reduced vision was now affecting her school work as she could no longer see the board or her near work. Although her VA was bad she did not appear unduly concerned or fretful.

I then tried masking, pinhole and single letters but that made absolutely no difference to VA. There was no real improvement with new RX, even though I picked up a significant myopic shift. Also her reduced near acuity was a bit of a mystery…? Surely if she was just myopic her near VA would be good?

What else to try?

Well, since she’s gone from +0.75 to such a high amount of myopia I thought perhaps her sugar levels were off (she was quite over-weight and admitted to doing little physical activity).  So I measured her random blood glucose. A reading over 11mMol/L at any stage would indicate diabetes. Her Blood Glucose level was 5.1mMoll/L which is considered to be within the normal range.

Her pupil responses were also normal. She had a NPC of 4cm with good sustainability, re-fixation and release. Her Eye movements were good both monocularly and binocularly. No diplopia reported and no midline jump. Both pursuits and saccades were accurate.

I noted some pallor of her optic nerve heads. Mild colour vision abnormality with red desaturation being present. Stereo acuity mildly reduced (40” at 40cm instead of the expected 20”). But could this could be an artefact of her reduced VA? The fact that her near VA was no better than her distance VA did not gel with the RX at all! By this point I was scratching my head!

Due to the sudden onset of her vision loss as well as her optic nerve head appearances I referred her as an emergency to a paediatric ophthalmologist. I didn’t cycloplege her as I would normally do as she was going straight to the ophthalmologist anyway and would have a cycloplegic refraction done there anyway…and the thought of torturing the poor child any more than necessary didn’t appeal.

What could be going on…?

Optic neuritis (retrobulbar? Seeing as her optic nerve head was not that pale maybe the problem could lie further back along the optic nerve…) Myopia due to diabetic onset or just developmental (both her parents are myopic but what about her near VA? And why so sudden?) Hysterical amblyopia (very unusual, especially in such a young child). Malingering (I can usually tease this out with some effort but nothing I did improved her VA) Accommodative spasm (once again her near VA should not be affected).

The ophthalmologist could also not improve her VA and was equally concerned. She also found myopia (confirmed with cycloplegic refraction) but could not get VA better even with RX in place. She noticed the optic nerve also looked mildly pale and this combined with the loss of VA prompted her to send the child for a CT scan. The scan came back clear but due to the loss of VA a decision was made to follow protocol for optic neuritis anyway.

This was done in consultation with the child’s paediatric neurologist. She was hospitalized and placed on IV steroids for five days and then had another 5 days of oral steroids. The parents at this point were frantic and her vision wasn’t improving. They went for a second opinion to another ophthalmologist who reviewed the case, did cycloplegic and examined the child. She also found the myopia but VA was no better. Her opinion was that there was no optic neuritis (although it might have settled due to treatment already received) and she referred the child back to me.

I once again did the refraction and found the same RX with myopia (R worse than L) but no improvement in the VA. So it had now been several weeks of reduced VA for her. She still did not appear to be to phased about her loss of vision.

Now I was seriously running out of options!

As an almost last resort I did a visual field exam. Et voila! What did I find…?

Phew! At least I now had a diagnosis and could try proceed. I consulted with her mother alone and asked if there had been any stressful event in her child’s recent past? It turned out that the family was robbed at gunpoint a week before she “lost her vision”. Due to this event they had closed their business and relocated and moved house!

When I returned to the consulting room I chatted to her about her ordeal in hospital, how it must have really helped her to see better, put the RX up in a trial frame, used my i-Pad VA chart at a different distance (it would be difficult for a child to try guess what the corresponding VA should be when tests and distances are changed) and with a lot of backward and forward eventually got 6/6 VA in both the R and L eye! Without the RX her VA was reduced to the expected level for that amount of myopia in the distance. Further questioning revealed that she had been feeling that her distance vision was deteriorating slowly before her “sudden loss of vision”. Referral to a psychologist was recommended but I am unsure if the parents were amenable with this. The RX was prescribed and I followed up in a month later to see if there was any change but she was stable, her vision was “back to normal” as long as she was wearing the script and she was doing well.

So it appears that this confounding case had two components: hysterical amblyopia precipitated by the traumatic event as well as developing myopia (probably genetic in origin as both her parents are myopic).

Hysterical Amblyopia is a syndrome that is characterized by reduced visual acuity not caused by any type of eye disease.  It is 4 times more prevalent in girls and shows a peak in incidence between the ages of 11 to 14. It is usually bilateral. Frequently the visual acuity is 6/60 or 6/36 in each eye. Examination of pupils, media and fundi is normal. The patient’s demeanour is typically detached and indifferent and there appears a lack of appreciation of the apparent gravity of the defect. Hysterical amblyopia is diagnosed by the presence of tubular fields because nothing but hysteria will produce tubular fields except retinitis pigmentosa. The characteristics of tubular fields are that they are of the same size no matter at what distance they are charted. The fields have sharp margins so that different test objects will give the same isopters. The fields are typically circular in shape, and do not show the normal widening to the temporal side. There are other types of field defects occasionally met with in hysterical amblyopia such as spiral fields, ring scotoma and hemianopia but all have two distinct features i.e. sharp margins and no change in size with distance.

Treatment: Patients with hysteria are typically amenable to suggestive therapy. Attempt has to be made to gain the confidence of the patient. Changing of lenses or adding plus and minus lenses of equal power in order to exhort the patient, will make them read lower and lower on the chart. A hysteric patient will read everything in a hesitating manner. Such successful treatment, however, is seen in cases of recent onset. The longer the duration of the disease the more difficult the treatment, as the sympathy received by the patient will encourage the state of mind which tends to perpetuate the hysterical reaction. Referral to a psychologist is recommended

We have all had children that pretend not to see well to get a cool pair of spectacles like their friend has. It is however unusual for pre-school children to malinger and if they do it is usually quite easy for the practitioner to figure this out. It is far simpler to suspect the malingerer than it is the psychosomatic patient although both have the same complaint. The similarities between hysteria and malingering are due to the fact that the patient with hysteria is malingering on a subconscious level, whereas a malingerer is malingering on a conscious level. To diagnose malingering the optometrist would have to have evidence that the patient is consciously feigning poor visual acuity. To this end tests have to rule out any reason for the substandard acuity. In other words no matter how strong your hunch you need to make sure that there is no pathological, refractive or other reason for the decreased acuity.

It is important for the optometrists to be able to differentiate between hysterical amblyopia and malingering. There are several tests which will aid in this process. Be vigilant of not rushing into a diagnosis of either by ensuring that there is no pathological or refractive reason for the patient’s presentation of decreased acuity.