Retina South Africa has spent the last year formalizing the transition to one united, strong organization under one constitution. The final approval from the Department of Social Development earlier this year paved the way for the final steps – to dissolve the branches that were individually constituted under the previous constitution.

What does this mean to the members of Retina South Africa?

A more democratic and universal voice in the running of the Foundation. Any member in good standing] can be nominated to the National Management Committee [NMC] wherever they live. All members in good standing will have an opportunity to vote for nominated delegates. Under the previous branch structure only representatives of branches could be nominated to serve on the NMC and only attendees at branch annual meetings could vote. Are you a paid up member of Retina South Africa, or have you applied for a membership fee waiver on financial grounds? If yes then you are a member in good standing. You will shortly receive an email calling for nominations to the NMC and how the voting process will proceed. Membership of the NMC is a voluntary position and this working group is responsible for the management and strategy of the Foundation. Please contact the national office at 0114501181 or email national@retinasa.org.za for any further information.

Personal peer counselling, fund raising, member engagement and public awareness is being offered at the Cape Town office. Call Manny on 082 780 4880. A complete patient support service is offered at the Port Elizabeth Office – Telephone 041 363 0164. For queries on research, genetic testing, clinical trials or counseling in any other areas please contact the national office. If you would like to convene a small support group in your area please contact us to assist you. Share call 0860595959.

YOUR VISION FIRST – ACT NOW is our theme and call to action for World Retina Week 23 to 29 September. Do you have a contact at your local radio station or community newspaper? Email us for a copy of the press release and 30 second MP3 audio clip to help create awareness of retinal vision loss.

We are recruiting patients over the age of 16 to participate in a phase 2 clinical trial to tests a pharmaceutical intervention to slow the rate of degeneration in Stargardt Disease. If you have a clinical diagnosis of Stargardt Disease, please send this together with a recent report on your Visual Acuity. Your central vision will need to be 6/ 96 [Snellen] or better, with spectacles. For more details contact Retina South Africa national office.

Retina South Africa was invited to attend important conferences in the last month: the annual Congress of the South African Society of Cataract and Refractive Surgery in Sandton from 31st July to August 3rd , and the 2019 Conference of the South African Optometric Society held in Pretoria. Karen Denton our AMD Ambassador gave an excellent presentation at the SAOA Conference on the influence of vision loss on major artists of the past and what treatments would have been available to them today. She also manned our very successful awareness table which was inundated with requests for material on retinal degeneration. Claudette Medefindt attended the Department of health planning session to improve genetic services in State hospitals. 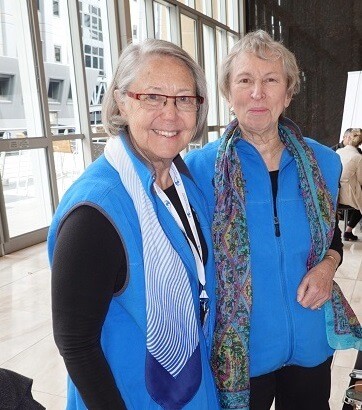 Karen Denton left with Claudette Medefindt at the SASCRS Conference in Sandton. 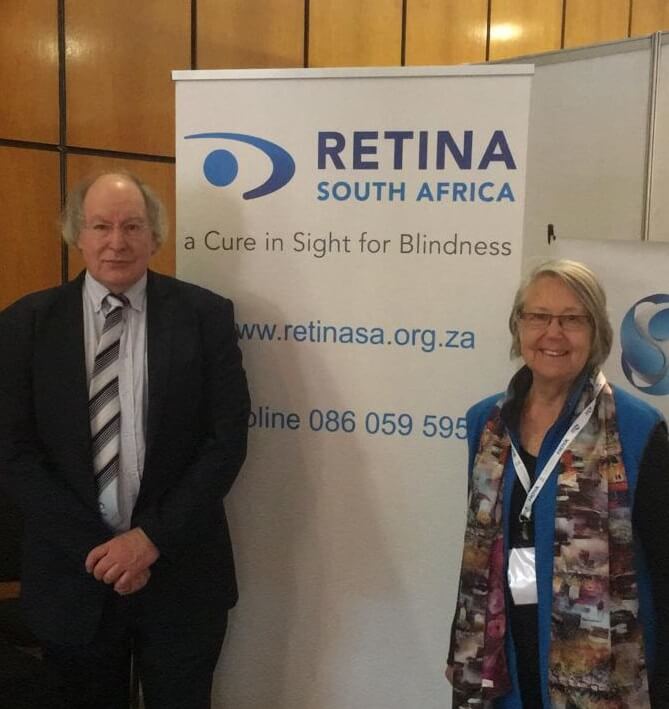 Karen is pictured here with Harry Rosen, CEO of SAOA and valued supporter of Retina SA.

The results on the first batch of gene tests on South African patients via the newly established Next Generation Sequencing Panel are just being delivered. This panel allows for local genetic diagnosis of patients with genetic retinal conditions at a huge saving of time and money. The success rate of results was very exciting. The total number of genes on the panel has now been increased to 116 and this compares very favorably to more expensive international screening panels. The next batch of patients have already being identified. We congratulate and thank Professor Ramesar and his team for this remarkable achievement. If you would like to find out about genetic testing please contact the national office.

Stem cells are the very early cells that occur during the first 14 days of conception. These embryonic cells will divide and specialize to become all the cells in the human body. These early cells are being used by researchers to grow replacement cells for damaged organs and other body parts. In retinal research the components of the retina are neural cells and are far more difficult to grow. Various trials are under way some using these embryonic stem cells and some using cells from a patient’s own body which are being manipulated to form progenitor cells which will become rods, cones or pigment epithelial cells.

This is promising research but it will be many years before stem cell therapy has been perfected to be available as a treatment. BEWARE unscrupulous claims of Stem Cell therapy on the internet. It could cost you not only all your savings, but also your sight and maybe even your life!!!

[Editors note: Beware of Stem Cell cowboys, here and abroad offering untested stem cell therapy- this is not yet a safe or proven treatment.]

[Editors note: LCA is an early onset form of retinal degeneration [RD] and is caused by mutations in one of the 15 + known genes associated with this rare bur devastating form of RD]

More than 70 genes (over 3000 mutations) are known to cause non-syndromic RP. Autosomal dominant (AD) is thought to cause 15-25% of RP cases, autosomal recessive (AR) 5 -20% , X-linked, 5-15% and simplex forms (inheritance not known), 40-50%. This accounts for the variability of age of onset and rate of degeneration between these various types of RP.

ProQR, a Netherlands-based developer of RNA therapies, has received authorization from the US Food and Drug Administration (FDA) to launch a clinical trial for QR-1123, a treatment for autosomal dominant RP(adRP) caused by the p23h mutation in the Rhodopsin gene. Enrolment of patients for the Phase 1/2 trial in North America begins shortly. The treatment will be delivered through intravitreal injections. ProQR reports that the p23h mutation in RHO is the most prevalent variant causing adRP in the US, affecting approximately 2,500 people. People with adRP caused by p23h mutations in RHO have one normal and one mutated copy of the RHO gene. QR-1123 is an antisense oligonucleotide (AON), a small piece of genetic material that binds to the mRNA (the genetic messages) of the mutated copy of RHO, thereby shutting the copy down. The normal copy of RHO is not altered by the treatment.

QR-1123 becomes ProQR’s third clinical program for an inherited retinal disease (IRD). The company’s other clinical programs are QR-110 for LCA 10 caused by the p.Cys998X mutation in the CEP290 gene and QR-421a for Usher syndrome type 2A caused by mutations in exon 13 of the USH2A gene.”

SparingVision’s gene therapy leads to the production of rod-derived cone-viability factor (RdCVF), which prevents or slows the degeneration of cones, the cells in the retina that provide central and color vision and enable people to read, drive, and recognize faces. RdCVF is naturally secreted by rods, the retinal cells that provide night and peripheral vision. Unlike a gene replacement therapy which targets a specific mutated gene, RdCVF is designed to work independent of the defective gene. That means RdCVF has the potential to save vision for a broad range of people with RP.

In RP, cone cell death can be devastating as daytime vision becomes impaired. Treatments such as the RDCVF work above are receiving much research focus. Another promising avenue is the research being done in Ireland on a cone neuroprotective treatment using Norgesterol, a progesterol derivatives on the Rd10 mouse model of RP. The results are showing significant preservation of cone photoreceptors –by a huge factor of 28 fold against controls. This shows an incredibly promising area of research for the end stage protection of central vision in RP.

The benefits of protecting your retinas against exposure to Ultra Violet light has long been accepted. New animal studies show that red filters may provide increased protection against light in the <600 nm wave length to which rods appear to be sensitive. Studies done on mice with a Rhodopsin mutation have shown benefit when housed in red-tinted plastic cages. The researchers concluded that limitation of short-wavelength light exposure significantly slows degeneration in the RhoP23H/+ mouse model. Red filters may represent a cost-effective and low-risk treatment for patients with rod-cone dystrophy in whom a sectoral phenotype is noted. 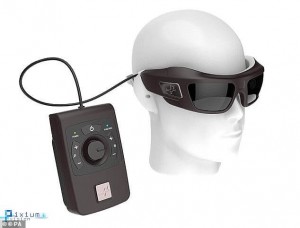 The Daily Mail [UK] recently reported on the success of a trial of Pixium’s Visions ‘bionic’ system. Volunteers with Age Related Macular Degeneration were fitted with a retinal implant which, combined with external goggles allowed the patients to read large text. The video camera in the goggles, relays images to a processor which then converts them into an infrared signal and beams them back into the eye. The implanted chip converts the images into a signal which is relayed via the optic nerve to the brain. The chip is 2mmx2mm with 400 micro electrodes.

[Image from the UK daily Mail].

Carotenoids are naturally occurring pigments found in most fruits and vegetables, plants, algae, and photosynthetic bacteria. Humans cannot synthesize carotenoids and must get them from food or supplementation. Carotenoids have a range of functions in human health; for example, lutein/zeaxanthin constitute macular pigment in the eye. The benefit of lutein in reducing progression of age-related macular eye disease and cataracts is strengthening. Despite the evidence for the health benefits of carotenoids, large population-based supplementation studies have produced mixed result.

[Editors note- Lutein, Zeaxanthin, L- Glutathion and Alpha lipoic acid are found in the supplement Retina Plus. Please discuss any supplementation with your Ophthalmologist]

NACA trial
The Foundation Fighting Blindness is making an investment of up to $7.5 million to advance a promising, emerging drug for retinitis pigmentosa (RP), and potentially Usher syndrome, into and through a Phase 2 clinical trial. Known as N-acetylcysteine-amide (NACA), the molecule is designed to slow vision loss by protecting retinal cells from oxidative stress. In previous FFB-funded lab studies at Johns Hopkins University, NACA slowed retinal degeneration in rodent models of RP.

Family membership is defined as a family unit living in one household. This is now R220 per year. We thank all those who have paid and also for your generous contributions to research. We are still dramatically short on our grant to the University of Cape Town, without whom no research or genetic testing could be done. Your support is vital for this important aspect of our work. There are still tickets available for our Fury Raffle to win a Mazda 2. Contact Linda at 011450 1181 or national@retinasa.org.za to order your book of 10 tickets for just R100. ALL the proceeds from the raffle tickets go directly to our research fund. Banking details: Retina South Africa, Standard Bank, Bedfordview branch, Code 018305, Account number 020312164. Please send us a copy of the eft so that we can issue your tickets.

THANK YOU BAUSCH AND LOMB FOR YOUR CONTINUED SUPPORT OF OUR WORK. The production and distribution of this newsletter is sponsored by Bausch and Lomb via an unconditional educational grant to Retina South Africa. The views and comments expressed in the newsletter do not necessarily reflect the views of Bausch and Lomb. 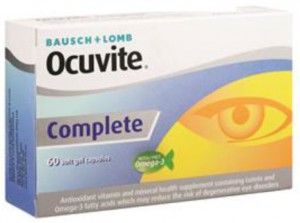 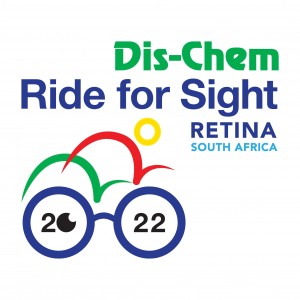