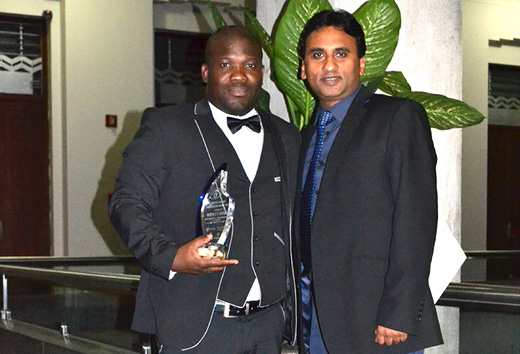 Mr France Nxumalo, the Sub-Regional Manager for Southern Africa, Brien Holden Vision Institute has been awarded The Paul Berman Young Leader Award, by the World Council of Optometry (WCO) few weeks ago at a conference in Colombia, for his outstanding contribution to the development of optometry and the underserved communities of Southern Africa.

The award, presented in honour of the late Dr. Paul Berman, is given to an optometrist who has made a considerable contribution over time to the achievement of WCO’s vision and mission and shows promising future leadership in world optometry. During his life Dr Paul Berman was instrumental in facilitating a close working relationship between the Brien Holden Vision Institute, LIONS and Essilor and which led to a collaboration for the implementation of the LIONS Vision Centres in Africa. His humility and commitment to creating access to eye health for all will always be remembered.

The Durban based, an Optometrist by profession Mr. Nxumalo looks after countries like South Africa, Malawi and Mozambique – where he ensures that the Institute’s activities and advocacy is prioritised by all stakeholders. Service delivery and human resource development in these countries and other underdeveloped countries is the mandate of the Institute and this is where Mr Nxumalo is playing an instrumental role.

The President of the World Council of Optometry, Susan Cooper, mentioned that the panel was particularly impressed with France’s professional record and strong personal commitment to the profession and his patients.

“Each and every one of the award winners have made a significant and lasting contribution to the promotion and furtherance of their profession,” Susan Cooper, OD, WCO President, said.

Standing with France Nxumalo in the picture is the Acting CEO of the Brien Holden Vision Institute Professor Kovin Naidoo who commented on Mr. Nxumalo’s award saying: France has come from very humble beginnings to become an internationally recognised optometrist. He has managed the Institute’s efforts in Southern Africa and as such has contributed to the reduction of avoidable blindness and visual impairment of our people. In his short career he has made significant achievements and will no doubt go on to make an even greater contribution. We at the Institute are very proud of him.